Paper 1: "The Internet is Too Slow". (Singla, Chandrasekaran, Godfrey, Maggs)

Ankit Singla proposes a "grand challenge for networking": reduce end-to-end latencies betwen points on the Internet to be closer to the minimum speed-of-light latency.

(The paper: The Internet at the Speed of Light, http://conferences.sigcomm.org/hotnets/2014/papers/hotnets-XIII-final111.pdf)

The Internet is too slow, Singla et al. argue, because the user experience of applications depends heavily on end-to-end latency, which (in the team's measurements) is too-often inflated over what could theoretically be achieved.

"It's not about bandwidth," Singla says. For Web traffic in developed countries, "additional bandwidth does not improve page load times by very much."

The team worked to account for why. In a measurement study, the authors loaded 28,000 Web sites over PlanetLab links. In the median, the total time to load a Web page was almost 25 times worse than what the authors predict based on an ideal model of speed-of-light transfer.

Why, the authors ask. The authors present a breakdown among:

But the bottom line, Singla says, is that the true responsibility lies with none of these. "The single most important factor does not reside in the transport-layer protocol stack at all. It's the infrastructure inflation that's more important than these other factors."

Singla presented the following plot, illustrating how much more efficiently the road network is laid out than the fiber lengths that make up the Internet2: 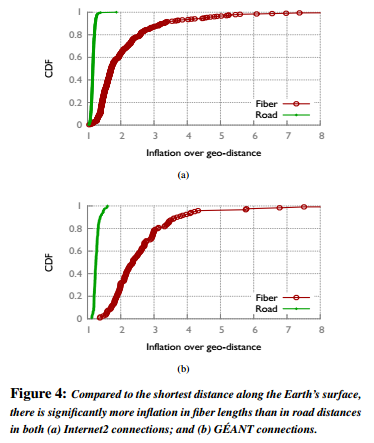 
There was a lively discussion after the talk.

Q: How does SSL affect your measurements?
A: On our list of popular Web sites, SSL was just not that common. Roughly 300 out of the 30,000 sites. We didn't include them, but bottom line, SSL costs three additional roundtrips. It doesn't fundamentally alter our measurements.

Q: (John Wroclawski): I think so. (Gives example of a large project to build a low-latency long-distance path for stock trading.) That was a massive fiber and engineering project. Larger point, there are people doing this. There's probably things we can learn from this.

Q: What about the challenge of doing it mobile in wireless networks?
A: This is an interesting avenue for future work!

Posted by Keith Winstein at 4:43 PM