SIGCOMM13: Participatory Networking: An API for Application Control of SDNs

The paper was presented by Andrew D. Ferguson

This talk was about PANE, an API for applications to control SDN. With PANE, user can work with network to achieve better performance, security and predictive behaviours.

Approaches to address the challenges: 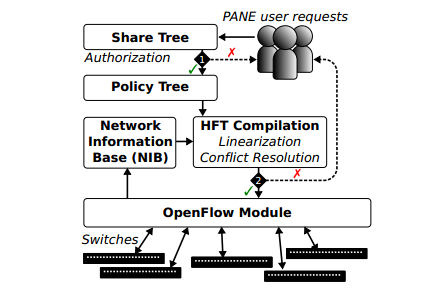 Evaluation:
The system is evaluated in a hadoop platform. In the test, there are 3 sort jobs: two low priority and one high priority. PANE can Speed up by 23% in high priority jobs. Also less than 30 rules coexist in the system.

Q: What about other resources like latency?
A: Will be considered in the future development. For example switch hops as indication of latency.

More details can be found: http://conferences.sigcomm.org/sigcomm/2013/papers/sigcomm/p327.pdf
Posted by Unknown at 7:05 AM