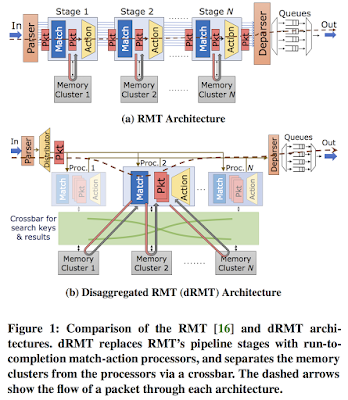 The dRMT's key idea is to disaggregate hardware resources i.e., memory and compute of a programmable switch.


Then, Anirudh address the following 3 questions:

For more details, please check out the paper.

dRMT is evaluated using 3 switch.p4 programs and one p4 program from a large switch asic manufacturer. The results shows significant  improvements over RMT --- dRMT chip requires 4.5%, 16%, 41%, and 50% fewer processors without compromise on line rate. Even for 100 randomly generated p4 program that has similar switch.p4 program characteristics,  dRMT chip require 10% lesser number of processors. With less number of processors, the throughput degradation of dRMT is graceful, where as RMT's performance falls off a cliff if a program need more pipeline stages.

Though the work has no working chip, it presents a design for dRMT chip and analysed its feasibility and chip area cost. In specific, dRMT require some additional chip area to implement a crossbar and match-action processors. For example, a 32 processor dRMT chip need an additional 5 mm^2, a modest increase when compared to 200 mm^2 typical switching chip.

Q1: While scaling wiring may not be a problem. It was observed that the problem is with latency introduced by the cross bar. Is there any study on latency?
Anirudh: Yes, latency does goes up with cross bar -- by a few clock cycles (4) in dRMT.

Q2: Whether RMT was just a reference model, which could be implemented in hardware using memory disaggregation,  just like dRMT does?
Anirudh: High performance programmable switching chips that the authors know of do not disaggregate memory and have memory that is local to each stage.

Q3: Whether RMT could benefit from having heterogeneous stages, where each stage had a different ratio of match:action:memory capacity?
Anirudh: There is significant hardware design effort involved in designing a single RMT stage. So you want to amortise that design cost by replicating the same design for all stages and making the stages homogeneous.