The paper is presented by Prof. Mark Handley (University College London). This paper has received a SIGCOMM 2017 Best Paper Award.

The talk starts by describing three goals in DC networks:
Although, achieving these simultaneously is challenging. The authors present NDP, a DC protocol architecture that simultaneously achieves low latency and high throughput.

One of the key ideas in this paper is the use of packet trimming when a switch queue fills up. This idea proposed as Cut Payload (CP) in this paper (worth checking out):
P. Cheng, F. Ren, R. Shu, and C. Lin. Catch the whole lot in an action: Rapid precise packet loss noti cation in data centers. In Proc. Usenix NSDI, 2014.

In NDP, the authors addressed the shortcomings of CP  with the following changes:


On top of presenting a switch queuing algorithm, NDP proposes a per-packet multipath forwarding and a novel transport protocol.

Implementation: the authors presented NDP in Linux hosts with DPDK, in a software switch, in a NetFPGA-based hardware switch, and in P4. 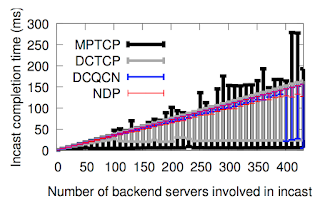 You can check out the great animations that were presented during the talk here.